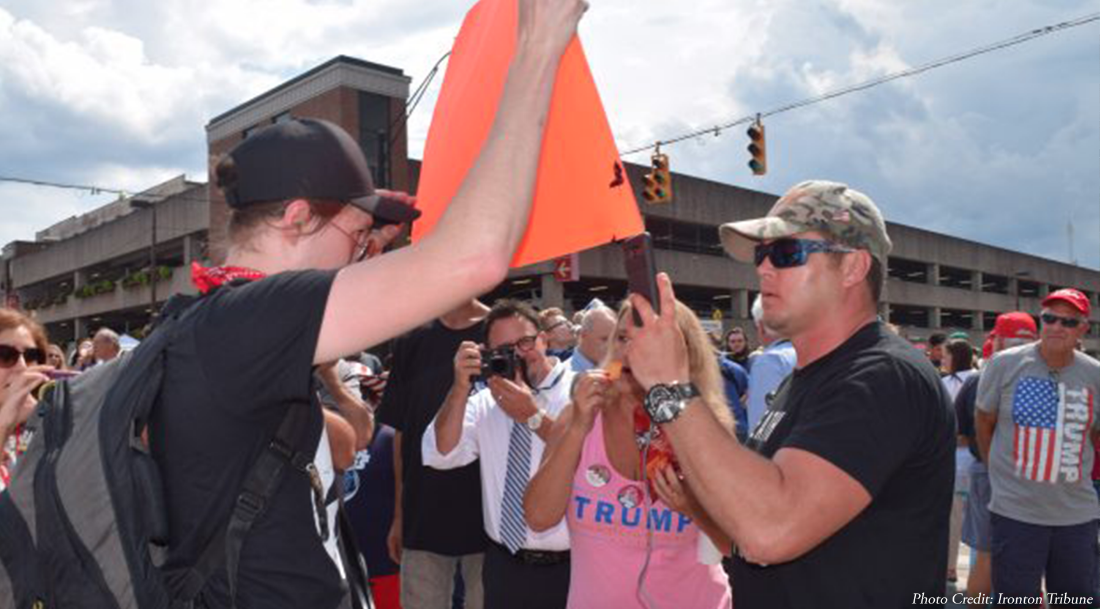 President Donald Trump visited the Charleston Civic Center on August 21. I understand why many West Virginians responded more to Trump than Clinton. He says he is going to bring coal back. He says he is going to bring jobs back to rural communities. He says he cares about the little guy. If you work as a miner, or a job in any way related to the coal industry from truck driver to mine equipment sales people to the waitress at the restaurant where miners eat, Trump’s words make sense. Much more so then Hilary Clinton’s statement that, “…we're going to put a lot of coal miners and coal companies out of business.”

Taken in or out of context, that statement, along with Clinton saying half of Donald Trump’s supporters belong in a “basket of deplorables” who are “racist, sexist, homophobic, xenophobic, Islamaphobic, you name it…” isn’t going to sway a lot of voters on the fence in West Virginia.

If you were considering voting for Trump, but weren’t entirely committed to the idea, and then the other candidate called you a deplorable and said she was going to kill your job, I can see why you wouldn’t vote for her.

I admit I never considered voting for Trump. But please don’t stop reading this because of that. I wasn’t sold on Clinton either. I was a Bernie man. Let me just say that I think, among other things, that Trump is bombastic, impulsive, and behaves in ways unbecoming of the President of the United States.

I decided to go downtown during Trump’s visit and stand with the protesters because I fit the demographic of many Trump supporters. I am a straight, white, Christian male. But that doesn’t mean I agree with Trump. Just because I have things in common with a candidate or his or her supporters doesn’t mean that I have to agree wholeheartedly with that demographic.

Protest rallies are both necessary and pointless.

You have to gather as a group to show unity against the opposition. You have to hope that a picture or video of folks standing on the sidewalk holding signs gets on TV so the world can see that you oppose whatever it is you oppose.

However, standing on the sidewalk holding a sign is probably not going to make someone who disagrees with you say, “Hey, you know what? I totally get what you’re saying now. I have read your sign and it changed my mind. I will now cross the lines and stand with you.”

Screaming at people going into the rally doesn’t help either. It just reinforces animosity if we stand and scream at each other.

I spent about an hour making a sign on an 8x10 piece of paper. It had to be that size because my handwriting is so bad I had to use a printer to make my sign. Otherwise the sign would have been illegible. Also, I can’t spell. I didn’t want to be one of those guys holding up a sign with misspelled words. It just makes you and your whole protest look stupid if your sign has spelling errors.

I wanted my sign to say who I was, not express hate.

Signs like “If you like walls, you’ll love prison!” and “Impeach Trump Now!” are just as inflammatory as “Lock Her Up!”

I like to practice Commonsensership. Get it? Like a mix of common sense and censorship. If we just holler out the first thing we think of, then any hope of dialogue devolves into ‘Your Mamma’ slams. We need to think about what we are going to say. Are we saying it to attempt to establish a reasonable debate? Or are we saying it just to be nasty. Obama haters said awful things about Obama. If you were disgusted by racial attacks on Obama, but use them to justify saying nasty things about Trump, then you are no better a person. We need to take the high road, as they say.

Knowing my sign wasn’t going to change any minds, and hoping to avoid stoking the flames, I decided to go with a statement that expressed who I am. If I got on TV, I wanted to look like a reasonable person countering the stereotypes that people have about West Virginia.

I decided to go with:

But then I changed ‘Against’ to ‘Opposed To’ because it seemed less aggressive. I am against Trump, but ‘Against’ seemed like a fightin’ word instead of a demonstration word. Maybe some of you think I should have been as aggressive as possible, but I wasn’t trying to start a fist fight. I was trying to show the world that a creature best described as a

though rare, does in fact exist.

Then I got super creative and made each word a different color of the rainbow to show that I, a straight, white, male, Christian, West Virginian supports the LGBTQ+ community.

As I chose my colors for the words I kept repeating ROY G. BIV to remind myself the rainbow goes Red, Orange, Yellow, Green, Blue, Indigo, Violet.

I triple checked the spelling of every word. Again, I didn’t want to look stupid. I used Sharpies to enhance the colors of the rainbow. I put on a button-up shirt instead of just a T-shirt. I combed my hair. I put on clean jeans. Hell, I looked nice enough go to a wedding. I had my wife check my spelling. I went to the Civic Center. I help up my sign. I got my picture taken. I got interviewed on camera. I hope I spoke well. I hope they edit the video even better. I went home. I posted my sign on the Instagram.

Someone commented that I had inverted my orange and yellow words. So my rainbow goes RYO G. BIV.

We all make mistakes. We all end up looking stupid. But even if it seems pointless, even if it probably won’t change any die-hard’s mind, when you see injustice you need to stand up and say, “Hey, I don’t agree with that.” Because sometimes there is somebody out there who wants to say the same thing you are saying, but they feel alone or afraid. I’m no hero. I’m not particularly brave. I hid my sign on the walk from my car to the protest site. I didn’t display it until I was safe amongst the protesters. But if you care enough, if you can muster the courage to hold up your sign, then you might inspire a less bold person to come and join you next time around.

Even a bunch of timid folks who never speak out, but who are impressed by those that do, can make a difference even if the only time they ever act bravely is when they are shrouded in the curtains of the voting booth.