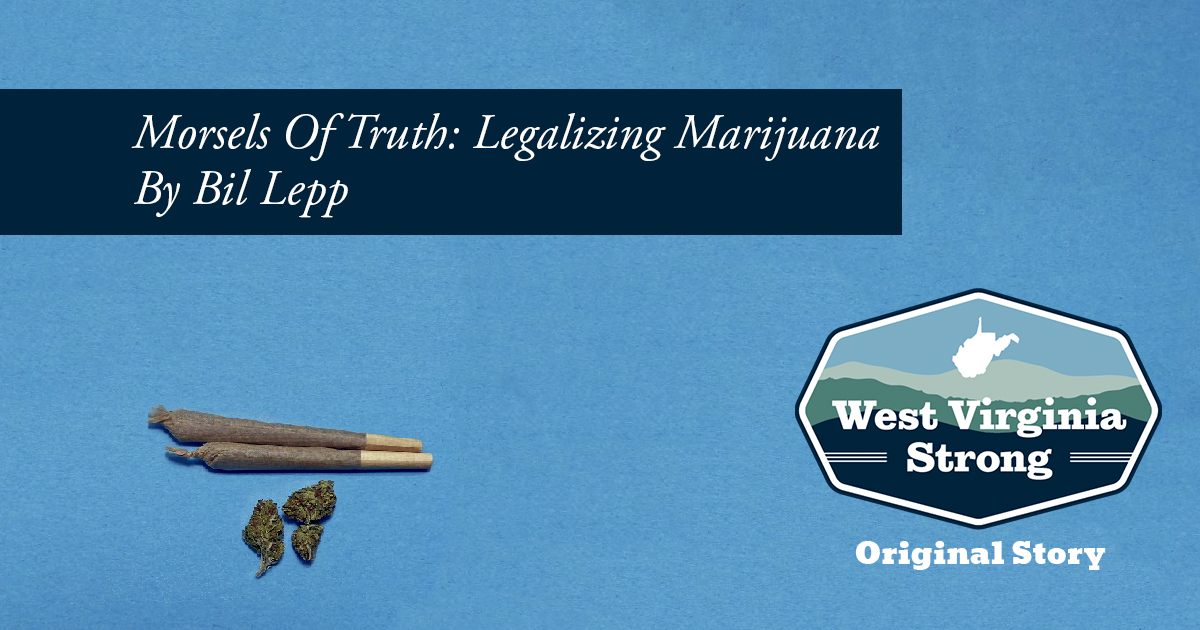 I grew up in the Nancy Reagan Just Say No era. I don’t do drugs, except the legal ones. I’m not positive recreational marijuana is great idea. I don’t want my kids smoking dope, or anything else. It seems like medical marijuana is a good idea for certain folks.

In past years the state government has passed bills eliminating many mine safety regulations and mine safety inspections.

They have passed bills that allow companies to increase the amount of pollutants that can be discharged into our waterways. But don’t fret, the cancer-causing chemicals are dumped into the waterways far enough upstream that by the time they get to your drinking water processing plant they are so diluted that it would take years and years of consumption to cause any health problems. So, don’t worry that you are drinking cancer-causing chemicals. You’ll be fine. Unless you live long enough to be affected by it, but you probably won’t.

After passing strong water protection laws in the wake of the 2014 drinking water contamination, the state government steadily relaxed provisions making it easier for companies to potentially again spill chemicals into our waterways.

The legislature has made it possible for companies to drill on private land whether the owners want drilling or not.

The legislature voted away conceal-carry registration and outlawed the right of communities to pass their own, local gun laws.

It took the state government forever to finally pass meaningful legislation limiting the purchase of medicines containing the ingredients for making meth. Fortunately, the flow of opioids into the state curbed the meth problem and gave legislatures a more pressing issue to ignore.

Also, you can own lions and tigers in West Virginia, but you have to register them with the state and, unless I’m mistaken, you cannot carry a concealed lion.

So why not legalize marijuana? If the argument is that marijuana might be hazardous to the health of West Virginians I would expect the government to legalize it. The state government is willing to let corporations pollute the air and water you ingest. Shouldn’t you be allowed to pollute yourself?

Actually, I lied. I think I do know why the state legislature won’t legalize pot. It’s a moral issue. Drugs are bad. Again, I’m a product of the Nancy Reagan era. I have parents who taught me not to use drugs. I go to a church that frowns on drug use. I don’t want my kids to smoke dope. Legislatures don’t want to upset their voters by legalizing a drug. That makes sense to me. But it isn’t consistent.

Legalized marijuana is bringing in millions of dollars to places like Colorado and Washington. The state of West Virginia could make a lot of money if it started selling dope. But we need to be first. If West Virginia legalizes marijuana before Ohio, Kentucky, Pennsylvania, Virginia and Maryland we will make millions of dollars. People will cross the borders in droves to spend their money in our state. Then we can spend that money on bridges, roads, state park maintenance, and to furnish the houses of Supreme Court justices. I guess we could build schools and pay teachers with the money, but that makes me feel unsettled.

“Dude, that school is AWESOME!”

“Dude, I know. We had to smoke a lot of doobies to build it!”

Legalized marijuana is coming, whether you like it or not. Fairly soon a state in our region will legalize recreational pot. I predict our state government will find ways to avoid legalizing marijuana until every other state but Mississippi and Alabama have made a fortune from it.